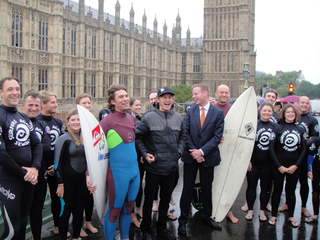 Last week, Stephen Gilbert MP chaired the launch meeting of the new Protect Our Waves All Party Parliamentary Group in conjunction with Surfers Against Sewage.

The meeting, which was attended by the Minister for Marine Environment (George Eustice MP), launched a new report into the effect of marine litter on the UK coastline which was produced in conjunction with World Animal Protection and the Crown Estate.

The report highlights the environmental impacts on marine ecosystems and wildlife, and the unaffordable costs to industries including fisheries and tourism. The report calls on government, industry and the public to adopt new strategies to reduce beach litter by 50% by 2020.

"Cornwall's spectacular coastline is one of our best assets and the effect of marine litter is nothing short of a disgrace. I was delighted to join with SAS to chair the inaugural meeting of this new APPG and press the government to take action and clean up our coastline."