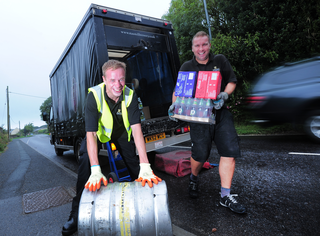 Stephen Gilbert, the MP for St Austell, has voted to exclude the locally based and family run St Austell Brewery - and all family brewers with less than 500 tied pubs - from new regulations that would have caused the St Austell pub group to incur added administrative costs.

Mr Gilbert, who is currently debating the Government's proposed Small Business and Regulatory Reform Bill in a Parliamentary Bill Committee, voted against the Government "Whip" in order to protect St Austell Brewery from new regulations aimed at largest Pub Companies.

"I have always said that I would put local people before party politics and that's what I have done. These regulations were never meant for family brewers and I was pleased to be able to join with other members of the committee in speaking out and voting against them. St Austell Brewery is a huge asset to our town and I want to see it continue to go from strength from strength."

Mr Gilbert joined with other "rebel" MPs on the committee in a vote which saw the Government lose their proposals to include family brewers in the scope of the Bill. The committee's decision has now to be ratified by the House of Commons in a later vote.

Mr Gilbert added: "The feeling in the committee was clear, yes we do need to tackle the worst practices of the biggest pub companies and the Bill will do that, but it was never intended to include family run breweries and I will continue to argue for their exclusion when the issue returns to the House of Commons."